EXCLUSIVE: Christopher Heyerdahl, who plays an ancient vampire in the Twilight Saga movies, will now play one in another screen adaptation of a popular book series — this time on TV. Heyerdahl is joining HBO’s hit vampire drama True Blood in a recurring role. He will portray Dieter Braun, an ancient, powerful vampire who plays a large part in the intelligence of the Authority and especially enjoys enhanced interrogation. That is familiar territory for Sanctuary alum Heyerdahl, who played the ancient Volturi vampire Marcus in three of the Twilight movies: New Moon, Breaking Dawn Part 1 and the upcoming Part 2 (photo on left). Additionally, he played a demon in an arc on the CW’s Supernatural. Heyerdahl, repped by Open Entertainment’s Lesa Kirk, currently co-stars on the AMC drama series Hell On Wheels playing Norwegian badass The Swede. The period Western was recently renewed for a second season. 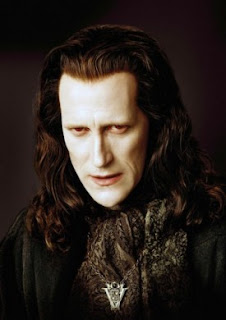