TICKETS ON SALE AND SCHEDULE ANNOUNCED FOR FOREVER IN FORKS: PHOENIX 2014


Phoenix, AZ – Each year Forever in Forks holds its annual event in a different city of some significance to the Twilight Saga, the New York Times Bestselling novels written by Phoenix native Stephenie Meyer. In 2014, Forever in Forks is coming to Phoenix, Arizona, hometown of both the novel's heroine Bella Swan and the beloved author of the series. On Saturday, January 25, 2014, at 8am MST ticket sales will open to the general public. Ticket sales have been open to the select few “early birds” who signed up for the Forever in Forks mailing list since Thursday.


Forever in Forks: Phoenix is being held at the Embassy Suites Phoenix North on June 20-22, 2014. 100% of the proceeds from the event will benefit Stand Up 2 Cancer, a charitable program established by media, entertainment and philanthropic leaders who have been affected by cancer. For $300, fans receive an assigned seat for panels throughout the weekend featuring actors, authors and more, access to the welcome and farewell breakfasts, a mid-day snack Friday, a pool party Saturday, entrance to the annual Forever Party, and an amazing swag bag. For $250 fans can purchase a general admission ticket to the same events without assigned seating. Each of the past events has sold out, so it is suggested that tickets are purchased early to guarantee admission. To purchase tickets or learn more about the packages and events, please visit http://www.foreverinforks.com


ABOUT FOREVER IN FORKS  Forever in Forks is an annual gathering for TWILIGHT fans to come together in support of a good cause. Each year, a Forever party is held in a TWILIGHT-related city, with proceeds going toward a chosen charity. In 2012, Forever in Forks raised $2,500 in Los Angeles for Alex’s Lemonade Stand. To learn more about Forever in Forks, including what’s behind the name, please visit http://www.foreverinforks.com/.

To raise funds for a powerful film project to raise awareness about our war veterans struggling with Post Traumatic Stress Disorder, Charlie Bewley is hosting a ONCE in a lifetime opportunity for Twilight fans! The chance to spend an entire evening at a small, private bowling party with several of your favorite Twilight stars!!!!!

The bowling party will be on Sunday evening, February 2, 2014 (exact time TBA) at the legendary Lucky Strike bowling alley in Hollywood, California.

The number of spots is limited, so reserve your place ASAP! To do that, write a check donation for $250 PER PERSON to Astoria Film Company for their Thunder Road Film fundraising campaign and mail it to:

*With your check, specify the donation is for the Bowling with Bewley incentive. (Go to ThunderRoadFilm.com to see the details.) Include your name and e-mail address. Please note this donation only covers the Bowling party (food, prizes, bowling), and does not include any of your travel, hotel, etc. expenses.

More about the film project: Charlie is working with his actor pals Steven Grayum and Matt Dallas to create a powerful film to raise awareness about our young war vets coming home and fighting a private battle with Post Traumatic Stress Disorder and other side effects of war. This project is extremely important to them, as it should be to all of us who benefit from our soldiers' sacrifices. The bowling party is an incentive for the TWILIGHT fans out there to help support this important and urgent cause.


Please help support this great cause AND party the night away with a bunch of crazy, fun Twilight stars!!
at 11:03 AM 0 comments

Hollywood is reveling in the box office returns for 2012, their biggest money-making year ever. But despite the high-grossing hits, there were way more major misses among the 727 titles released last year – movies based on recycled premises, re-working concepts that were already tired a decade or more ago, and which were the cinematic equivalent of re-treaded tires. Those are the films The Golden Raspberry Awards have been annually dis-honoring since 1980.
Nominees for the 33rd Annual RAZZIE® Awards, satirizing the Worst Achievements in Film for 2012, include several Repeat Offenders, returning for more pie-in-the-face/light-hearted joshing in the one Tinsel Town trophy derby no one wants to win. Adam Sandler is back, following up his record-setting 2011 RAZZIE® “winner” JACK & JILL with an even more off-putting “family comedy,” THAT’S MY BOY. Focused on a scofflaw dad who fathered (then abandoned) a son with his 7th grade teacher, BOY amassed a total of 8 nominations, including Worst Picture and Worst Actor for Sandler himself – while also grossing about half what JACK & JILL did. But Sandler’s misfire was topped by the final chapter in a franchise which has reliably racked up RAZZIE® nominations year- after-year: TWILIGHT SAGA: BREAKING DAWN PART 2 (or as RAZZIE® Wags call it, TWILIGHT: S.B.D. #2). The ultimate installment of the inexplicably successful series focuses on Shirtless Werewolf Jacob and his creepy relationship with the daughter of Sparkly Vampire Edward and Gloomy Goth Gal Bella. Together, the four face a final showdown that will determine the fate of Romantic-But-Boring Monsters everywhere. TWILIGHT #5 collected a total of 11 nominations, from only 10 categories. In addition to being up for Worst Picture and earning nominations for all 3 of its principal “actors,” it is also the first film ever to get dual Worst Screen Couple RAZZIE® nods, one for Edward & Bella and one for Jason & the child Renesmee (who share an onscreen relationship fraught with inappropriate overtones). In addition to TWILIGHT S.B.D. #2 and THAT’S MY BOY, Worst Picturenominees for 2012 include: The bazillion-dollar board-game-based box office blunder BATTLESHIP, the latest career-killing comedy from Eddie Murphy, A THOUSAND WORDS (which spent four years moldering in Paramount’s film vaults beforescoring a “Perfect ZERO” Rating at RottenTomatoes.com) and the lowest- grossing nationwide release of all time, THE OOGIELOVES IN BIG BALLOON ADVENTURE (which made a microscopic $47 per theatre on its opening night last August).

Twilight actor Charlie Bewley has signed up for a role on The Vampire Diaries.
The 31-year-old - who played vampire Demetri in the Twilight film series - will appear in at least two episodes of the CW drama, TV Guide reports.
Bewley will play a mysterious character named Vaughn, who is described as "tough and rugged".

Camille Guaty has also won a role on the paranormal drama. The actress - best known for playing Maricruz on Fox's Prison Break - will play Caitlin, a figure from Professor Shane's (David Alpay) past.
Both Guaty and Bewley will make their The Vampire Diaries debut in the 13th episode of the show's fourth season and may recur beyond their initial two-episode stint.
Supernatural star Rick Worthy was also cast on the series last month - the 45-year-old actor will play the father of Bonnie (Kat Graham).
The Vampire Diaries airs on The CW in the US and on ITV2 in the UK.
at 8:40 AM 0 comments

The very talented { @alchemission } at the final @twi_tour

Catching up with the very talented Charlie Bewley is always a good time. For those that were able to ever go to one of his panels at the very successful twilight conventions will miss the comedy and honesty of the awesome British talent.
Thanks for the great times and giving us Demetri.. 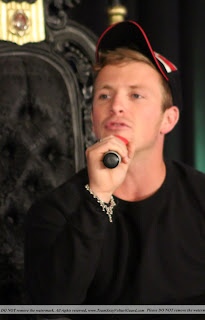 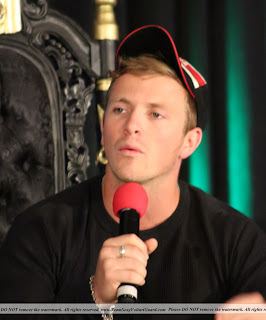 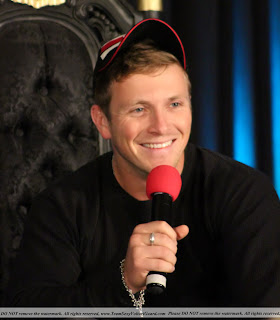 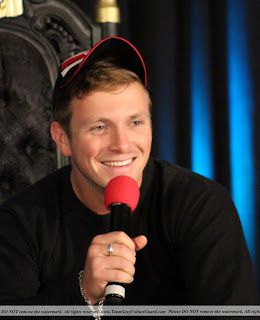 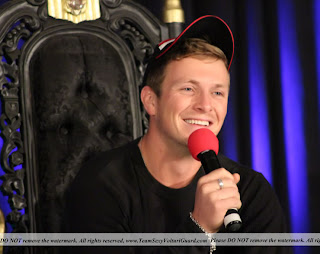 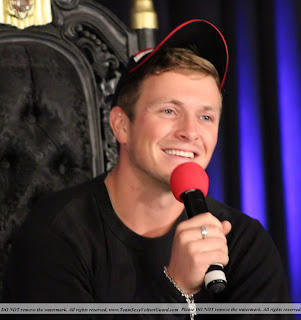 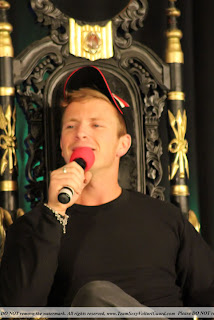 DISCLAIMER: You are more the welcome to share our pictures, but please do NOT remove our watermark and please make sure to give us credit at @TeamSexyVolturi and www.TeamSexyVolturGuard.com 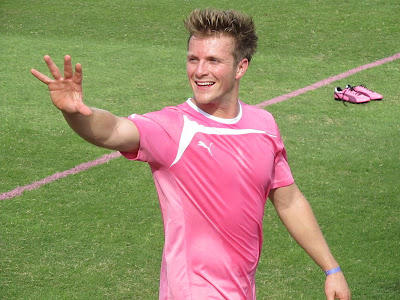