I hope you all stayed tuned. I am heading to LA today for the Official Breaking Dawn convention.

Posting pics, stories and everything I can get my hands on. 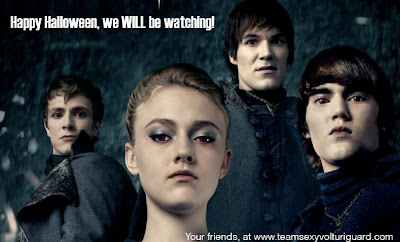 We all know what happens at the Cullen's place between the wedding and the pregnancy. The messenger must go, thanks to Felix and Demetri.

Is that Gianna that has to die by the hands of the guard?

Stephenie Meyer does say that Gianna does die and it is at the hands of Demetri.

your first ever so brief glimpse of Demetri in this Breaking Dawn clip.

We all love our #Volturi guards, here are some wallpapers for your desktops! Enjoy! 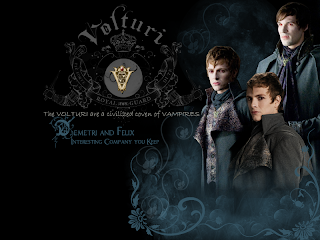 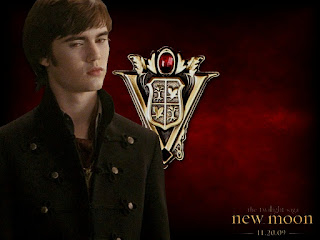 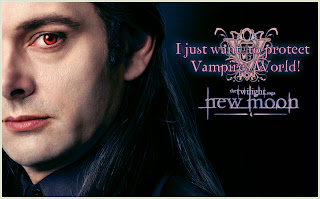 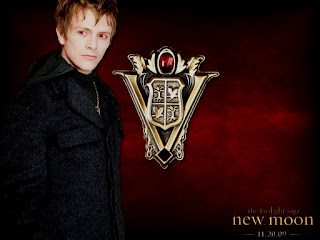 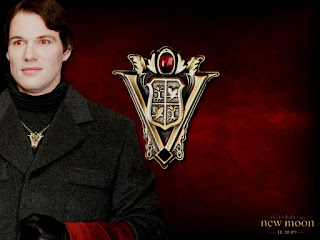 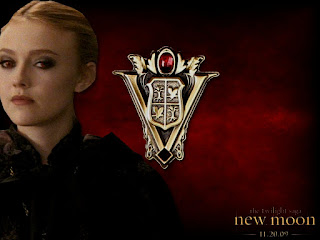 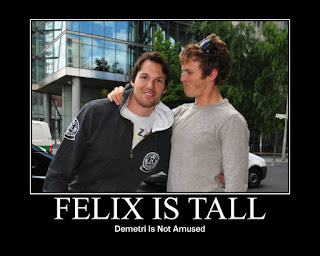 This is a reprint of our review from the 2011 Sundance Film Festival by correspondent James Rocchi.


But before we get to that review. I just wanted to say something quick. I hoped to review this film this week and ran out of time. No need though. We have a solid review from James Rocchi that we can reprint and you can read below. So the point of this? Not much. I would go a little higher on the grade, B+ for sure, but James touches upon everything quite well (especially a certain faction of people that could be too ready to dismiss the picture). I suppose I just feel a little bit more passionate about this film. There’s a reason Paramount scooped this up at Sundance for a pretty little penny—when was the last time that studio acquired something instead of just developing stuff in house? And there’s a reason the film won the Grand Jury Prize and its terrific lead Felicity Jones took a Special Jury prize (and over Elizabeth Olsen, no less, who was earning raves for her performance in “Martha Marcy May Marlene”). And I suspect that James grade is such because, as he says, the film doesn’t reinvent the wheel, and you have seen this story before. But based on its burning-brightly convictions and its execution, “Like Crazy,” is an A-grade passion play that transports you right back to those early days of 20-something love when you did make foolish, irrational decisions—because you really didn’t know better (and or you just felt something so damn deeply, you didn’t care). It’s honestly observed, the soundtrack is killer (especially Dustin O’Halloran‘s piano instrumentals which I had thought was score specfically written for the film), the performances and (often the unspoken moments) are deeply affecting and it’s just an accurate depiction of that woozy, punch-drunk feeling you’ve felt maybe once or twice in your life that has simply knocked you off your feet. This is a long-winded way of the editor-in-chief of this site saying: I strongly encourage you to see this film. It’s not perfect, but as Sloan tried to articulate about passion over imperfections (and Canadian Rocchi might agree): “the point is not the grammar, it’s the feeling.”
——
There is nothing wrong with a familiar tale, as long as that tale is well told. So it is with “Like Crazy,” director Drake Doremus’ chronicle of young love between Jacob (Anton Yelchin), a young design student and Anna (Felicity Jones), a journalism student from Britain. Jacob and Anna meet in University; she pursues him. Dates become a relationship; a relationship becomes a challenge; that challenge becomes….an obsession? A necessity? Many romantic dramas revolve around the principle that love conquers all; when “Like Crazy” excels, it is because Doremus and his actors know, and convey, how that conquest will not necessarily be particularly kind or easy.

Movie Scores: How the critics rated the new movies

A doomed young love is tugging at critics' hearts this weekend.

"Like Crazy" is receiving some of the best reviews in a crowded crop of new releases. Anton Yelchin and Felicity Jones co-star as a couple of college students who quickly fall for each other but have trouble staying together because of immigration issues. AP Movie Critic Christy Lemire was in the minority in her negative review, saying: "Their exchanges frequently turn pouty and mopey for no good reason; it's no fun to be in that kind of relationship yourself, but watching two other people behave this way is even more agonizing." She gave the movie one and a half stars out of four.

Genre movies are always particularly personal ones – what horrifies me may only make you laugh, what makes you laugh may only slightly nauseate me – but few things seem to bring out such wildly differing reactions as romances.

“Oh my… The trailer completely pulled at my heartstrings :>” kmbrlyfilmgeek recently posted at the IMDB page for “Like Crazy,” a new twenty-something love story.

“Trailer made me throw up…This looks and sounds like the most sentimental tear-jerking crap ever!” dirkhoekstra posted directly underneath her mash note.

Hmm, so, kimbrly, dirk – I guess we’re not going to make an internet love connection here today.
The reality of the film, though, lies between those two extremes.

There are some real and lovely moments here (far lovelier than you’d expect from a director whose last film was called “Douchebag”). But the movie can also sometimes confuse what’s real with what’s merely realistic, and lose its sense of drama along the way.

The story is about two young, too-young people, played by Anton Yelchin and Felicity Jones. They’re both finishing up college, but also still slightly puppyish; they fall for each other, but have some problems turning affection and sex into love and commitment.

She’s British and has to return once her student visa runs out; he starts a business, and makes the mistake of hiring a very attractive assistant. Other problems – both the separation of a very long plane ride, and the distancing effect of text messages – complicate things.

But to its credit, “Like Crazy” remains fairly uncomplicated – despite the title, this isn’t one of those Hollywood thrillers when a possessive lover suddenly shows up with a knife.

It’s just the small story of two young people trying hard to decide whether this is an infatuation worth growing past, or a real relationship worth growing into.

To its detriment, though, “Like Crazy” is often too small. Although Jones nicely conveys a slightly spoiled, slightly uncertain young woman, Yelchin’s character is underwritten (and he remains one of the least assertive actors on the screen).

And while it does get how petty arguments can often be, it fails to raise its scenes about them above the petty. (Director Doremus’ one big stylistic touch – showing Jones immobile, waiting for Yelchin’s plane to land, while hundreds of people around her get on with their lives – only makes her look slightly creepy.)

Terribly sincere, determinedly small, “Like Crazy” doesn’t deserve the automatic disdain that movie romances often get (almost invariably, unfortunately from men). It has its small, sweet good points.
But if this is really the sort of movie that pulls at your heartstrings until you cry – well, your emotions may need just a little bit of a tuning up.

Ratings note: The film contains some strong language and sensuality.