Now, that's what we call a shoot-'em-up with the right white trash attitude: loosely based on John Ford's classic western three GODFATHERS from 1948, THE BAYTOWN OUTLAWS tells the supercharged tale of three outlaw brothers from Dukes of Hazard country-did get a shot at redemption when they are being hired by an abused wife to abduct her ex-husband's godson bandido. Then all hell breaks loose with more shootouts than you can shake your grubby Lynyrd Skynyrd T-shirt AT.

The South's Gonna Rise Again! promised us before 50 years, the catchy theme song from Herschell Gordon Lewis' 2000 MANIACS. Now is fulfilled the prophecy of one and a half hours of fun, filled with the blazing, sweaty rednecks, hot biker chicks and could hardly be unsheathed Wummen: THE OUTLAWS BAYTOWN, the directorial debut of Barry Battles, takes no prisoners. It belongs to the genre of films that shoots straight, to move any more, and then later asks for the occasion. Lots of desert shoot-'em-up based on John Ford's Western 3 GODFATHERS redemption of 1948, where three bandits of a dying mother promises to bring to her baby through the desert to the city safe. This modification of the Magi, the decisive quantity is postmodern oblique and fucked up than it would have been possible in their forties: a party for the film Blood Sweat & Tears Group! 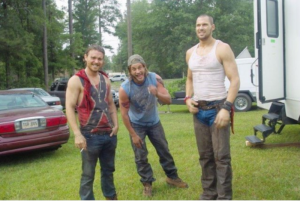 It focuses on three of the Kings of Leon after a long weeks reminiscent kid with greasy hair. Already in the first scene of the film-tempered they manage a booth drug dealers close flat - and subsequently stated that they had unfortunately missed the house number. The Oodie brothers - the scratched Brick, the taciturn McQueen and the gigantic Lincoln - are therefore the best choice destined for a job where it could be uncomfortable. For a pretty penny, the trio agreed to resort to an abused woman in her act of retaliation under the arms. But they will kidnap the godson of Celeste's ex-husband. From now conjures Director Battles the surprises every minute of the Stetson: The former turns out to be most influential in the Bandido County and his revenge is as cold as ice, as we know it from the Klingons. In sustained fire cross our path unwashed heroes of martial killer babes, bounty hunters and some Federals who also want a bit mitballern. Earned warhorses like Billy Bob Thornton and Hollywood beauties Eva Longoria and Zoe Bell, and south in the lead roles Clayne Crawford, Travis Fimmel and Daniel Cudmore as the out-bufftesten Hellcats of the Mason-Dixon Line have obvious pleasure, the lower instincts of the cinema audience to satisfy. A final film that rocks. Says Neil Young: Southern Man Do not Need Him Around!