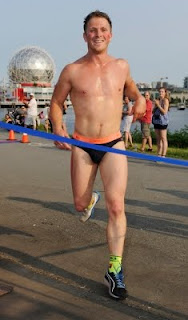 Twilight star Charlie Bewley put away his fangs and donned a pair of undies to raise awareness for cancer in Vancouver’s seventh annual Underwear Affair Saturday.

And it seems the scanty costume fared well for the actor: He was first to cross the finish line.

Bewley’s involvement in the race was happenstance — he was vacationing in the city when he heard about it.

“I literally turned up about half an hour before the race and asked if I could join,” Bewley told The Province on Sunday.

But it wasn’t his first time getting involved with the B.C. Cancer Foundation — the Twilight actor, who plays Demitri, organized the Run For Your Life campaign last year and raised $20,000 for one of his friends suffering from lung cancer.

She was being treated in B.C. where Bewley would visit her.

“You could just really feel ... her fears and helplessness,” he said. “And at that point I realized I had to try and do something to help her.”

She died a week before the run. Bewley still completed the run and donated the proceeds to the B.C. Cancer Foundation.

“Cancer touches everyone at some time in their life whether it’s them or someone else,” said B.C. Cancer Foundation CEO Doug Nelson. “With Charlie’s star power, of course, it raises awareness both for the cause and the event.”

By running in Saturday’s Underwear Affair, Bewley hoped to continue spreading his Run For Your Life message.

“I [hope I] can inspire more people to run and get fit, get in shape and raise money for awareness, like the B.C. Cancer Foundation.”

Bewley plans to raise money for his donation by selling his winning underwear. He also hopes to organize another Run For Your Life event in Vancouver next year.