After two years together friends are saying that inseparable actors Michael Sheen and Rachel McAdams are heading for marriage.
Since they were photographed together in the Royal Box at the Wimbledon ladies’ final earlier this month, the couple have spent at least a week together on the set of Richard Curtis’s latest romcom, About Time.
McAdams, 33, is the lead, opposite Dublin-born Harry Potter star Domhnall Gleeson, 29. 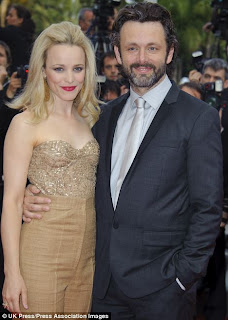 Sheen, 43, who played Tony Blair in The Queen, is apparently resting between films, and has insisted on accompanying his Canadian-born girlfriend to deepest Cornwall, where they were seen kissing and cuddling between shots in tiny Portloe.The couple met in 2010 on Woody Allen’s Midnight In Paris when an on-screen affair turned into love off-screen.
at 12:27 PM