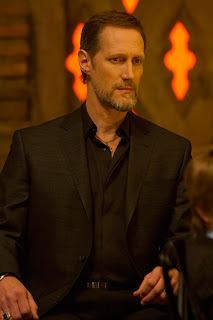 Tall, lanky and foreboding, Christopher Heyerdahl cuts an indomitable presence onscreen. He’s become part of several TV shows and films with devoted followings, including The Twlight Saga, where he plays Marcus, a member of the ruling Volturi;Stargate Atlantis, during which he was covered in makeup to portray Todd the Wraith;Sanctuary, also a heavy makeup gig, as Bigfoot; the demon Alastair on Supernatural; and he’s more down-to-Earth, but no less frightening, as The Swede on AMC’s Hell on Wheels. But even he might be surprised at the level of fandom that comes from being on HBO’s vampire hit True Blood. Heyerdahl makes his debut on this week’s episode, “Authority Always Wins” — premiering Sunday at 9pm — as Dieter Braun, a member of The Authority. His soft-spoken, steely eyed demeanor makes his interrogation scene with Bill Compton (Stephen Moyer) all the more compelling, and chilling.

Offscreen, Heyerdahl is pleasant and thoughtful, the antithesis of his persona. He took some time to answer our “7 Questions,” during which I was careful — just in case — not to bring out his bad side.

1. You’re at a magazine rack and can only pick three titles. Which ones do you choose?

2. If your TV only carried three shows, which three would you have to have?

3. What’s been your strangest fan encounter to date?

Fans have always been pretty cool. The neat thing is, the other night, I had Paul Reubens (a.k.a. Pee-wee Herman) come up and tell me that he really liked my work. That was pretty cool for me. He’s not really a fan, but he’s someone who appreciates my work, and whose work I appreciate. That’s always nice when you appreciate someone’s work and you want to compliment them, and they end up doing it to you first.

4. When’s the first time you were starstruck?

I was living in L.A. probably 15 years ago, and I was sitting in the Kings Road café with a buddy of mine, and there was this kind of funny-looking, white-haired dude pedaling along a bike along with sort of a goofy bicycle helmet and puffy workout pants that have elastic at the ankles. I’m staring at this guy, and I’m feeling very [drawn] to this guy. “Who is this?” He takes his helmet off, and it’s Steve Martin. I’m a huge fan [and] I’m trying not to stare, and he just stops right behind my buddy because we’re right at the entrance to the café, and he’s facing me. He’s staring at me. So I look at him, he looks at me, sort of smiles, nods, I smile and nod, then the moment was over and he goes into the café. I have no idea why, but it was just one of those moments when nothing was said, but it was a sweet connection.

5. What are three things you have to have in your fridge or pantry?

A seven-grain, made by myself, mixer of porridge. I need to have a currie mix, and a bottle of Armagnac.

6. You’re part of a lot of series that have rabid fan bases — “True Blood,” “Twilight,” “Stargate: Atlantis,” “Supernatural.” Is there one, you think, that is the most fervent or dedicated?

All these genre pieces have very passionate fans, and they’re not afraid to express themselves. So I really haven’t noticed a difference aside from age group, and some groups have more women than men. … They’re all passionate, which is great. There’s nothing like people who wear their heart on their sleeves. They have no problem telling you if they love or do not love the work that you’re doing. If they think it’s boring, you know very quickly. If they think it’s really great, you know, again, very quickly.

7. You play a lot of scary people. Do you feel incumbent than to be extra nice and sunny in real life?

(Laughs) It’s a funny thing, because you never know when somebody is afraid of you or not. So many people go about hiding these things. No, I just love life, and I love sharing with my friends, people I love. It’s not really that difficult, and then I get to express the darker side of my personality in those kinds of characters. It works out really well.